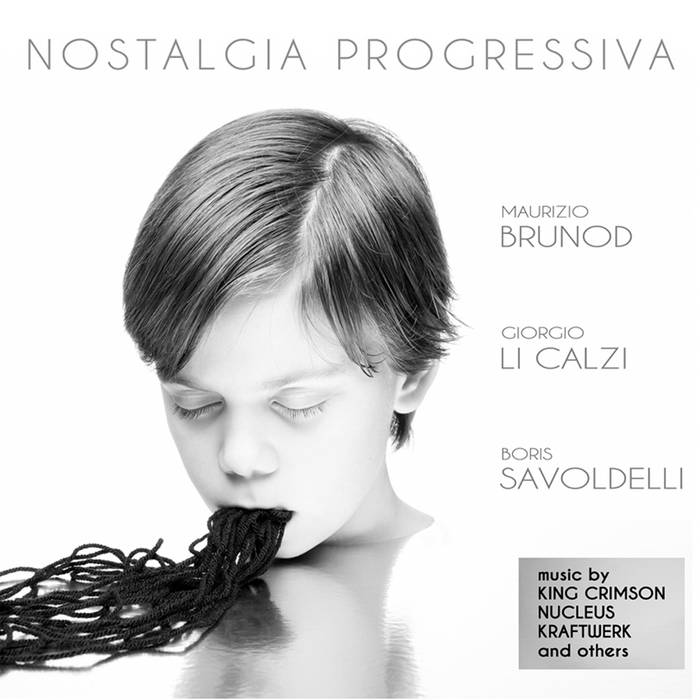 David Markfield This musicians remain true to the spirit of the original songs. At the same time they make them uniquely their own. A refreshing take on some classic songs. Favorite track: Starless.

Nostalgia is defined as "the acute desire to go back to a familar place that is now far away". This is the definition that inspired the 3 musicians involved in this project: Maurizio Brunod (guitar), Giorgio Li Calzi (trumpet,electronic) and Boris Savoldelli (voice, electronics) who put to music their acute desire to go back to the UK at the end of the 1960s when the extraordinary period of progressive, psycaldelic rock was born - a period that will never be repeated, nor forgotten, and which shaped not only the music of that era but of the years which follower. This is not a sterile tribute to progressive rock in tones of jazz but an original reinterpretation - as one would expect from these artists - starting from the formation of a trio - intentionally demode - that expertly balances acustic instruments with electric/electronics, melodic "philologically correct" quotes and daring improvisations to recreate the magical atmosphere of the English progressive movement as seen through new eyes, offering a fresh, contemporary, definitely original, and engaging sound.

MAURIZIO BRUNOD among the most prominent guitarists of the contemporary scenery, he has got in his background a very active career, next to some of the icons of global Jazz history, such as Miroslav Vitous, Tim Berne, Enrico Rava, Javer Girotto, Roberto Gatto, Daniele di Bonaventura, Ralph Towner, Alexander Balanescu, Garrison Fewell, Calixto Oviedo, John Surman and many others. He published more than 30 albums and he’s the founder, with Massimo Barbiero, of the historical band Enten Eller, with whom he has performed all over the world. He is also author one didactic best seller: “Manuale di Sopravvivenza del Chitarrista curioso”, published by Curci ed. in 2014.

GIORGIO LI CALZI: trumpet player and music producer. Since the end of the 80s he composes well-known jingles for radio and TV, and he produces theme songs and pieces for radio and TV transmissions. From 1990 on, he dedicates himself to the trumpet, realizing more than 10 albums since 1994, playing and recording with many international artists, such as the historical member of Kraftwerk, Wolfgang Flür, and
Lenine, Alexander Balanescu, Douglas Benford, Marconi Union, Thomas Leer, Mamady Koyatè, Elena Roggero and Tiziana Ghiglioni. From 2006 on his musical activity live, linked to the theatrical world, intensifies: he adds sounds to redings and works of di Andrea Bajani, Massimo Carlotto, Giuseppe Culicchia, Tiziano Scarpa, Fabio Geda, Elena Canone, Oliviero Corbetta, Mario Brusa, Michele Di Mauro, Massimo Giovara, Alessandro Haber, Banda Osiris.

BORIS SAVOLDELLI: vocal performer, gifted of a striking personality. He has published many albums with the historical NY’s label MoonJune, by himself but also in collaboration with musicians from all over the world, with whom he has often performed on stage too: Marc Ribot, Jimmy Haslip, Elliott Sharp, Paolo Fresu, Garrison Fewell, Gianluca Petrella, Igor Butman, Dwiki Dharmavan, Yaron Stavi, Gilad Atzmon, Markus Reuter, Asaf Sirkis. He has been pointed out several times as one of the most interesting world Jazz singers by numerous musical referendums; he performed in some of the most important Jazz festivals and clubs in Italy, USA, Brazil, China, South Korea, Japan and Indonesia. In October 2015, in Moscow, he received the international prize “Sergey Esenin”, for his vocal performance of Esenin poems in his recording project “Esenin in Jazz”. He’s also teacher of Jazz Singing at Venice and Brescia Conservatories of Music.

Recoeded on July 11, 2017 at Il Pollaio studio, in Ronco Biellese (Italy) by Piergiorgio Miotto. Mixed and mastered by Giorgio Li Calzi.
Reelased in Italy in 2018.
International sub-distribution by MoonJune Records.