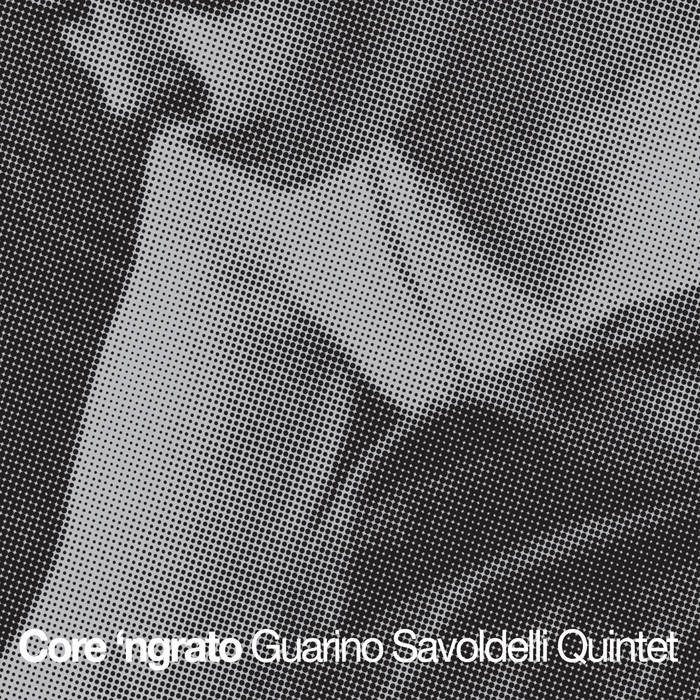 While he only has about a half dozen prior releases over an extended period of time, solo and in collaboration, pianist and arranger Corrado Guarino is known well on the Italian jazz scene. For Core ‘ngrato he has teamed up with acclaimed singer Boris Savoldelli, who should be well known to most Exposé readers through his association with Moonjune Records and many releases on that label. Rounding out the quintet are Guido Bombardieri on alto sax and clarinet, Tito Mangialajo Rantzer on contrabass, and drummer Tito Mangialajo Rantzer, all of whom have played on Guarino's previous releases Chi? (2004), a series of five jazz tribute albums La Fiabe del Jazz released between 2008 and 2011, and Si Veda Che Era Destino (2011), and probably a few others I'm unaware of, definitely a tight group of musicians well before Savoldelli showed up, but it's his chameleon-like vocalizations and electronic voice alterations that make this album so compelling and unique. Savoldelli and Guarino composed only two of the album’s ten cuts, three are 17th and 19th Century traditionals, and the remainder are by other composers outside the quintet. Most of the pieces are slightly on the laid-back side, but several are upbeat and aggressive, like “Ciceranella,” which I’m sure I’ve heard before somewhere, where Mangialajo gives an impressive drum solo during its five minute duration, and Savoldelli pushes it to the limit. “So' Le Sorbe e Le Nespole Amare” is another powerful and melodic piece with a definite folky flavor, that offers sax man Bombardieri plenty of room to shine. Every piece here is outstanding, offering a range of jazz and vocal ideas that will both soothe and dazzle. - Peter Thelen, Expose Magazine

DataZero, a music production company from Lovere, Italy, was conceived by Alberto Mondinelli (formerly of the the Clusone Jazz.


Association and promoter of musical events in the area of ​​Lago d'Iseo). His friendship with Boris Savoldelli led him to know Leonardo Pavkovic of the New York label MoonJune Records, which has released 3 albums of Boris Savoldelli: "Biocosmopolitan", "Insanology" and "The Great Jazz Gig In The Sky".

"Core 'Ngrato" is the first collaboration between MoonJune and DataZero.

Principally self-taught, he graduated at Verona Conservatory in Band Instrumentation. He attended "Siena jazz" summer seminars, playing the piano with Franco D'Andrea and studying arrangement and composition with G.Gazzani and B.Tommaso. His compositions for wind ensemble and jazz orchestra won prizes at different international contests. Between 1990 and 2000 he collaborated as composer-arranger with the "Ensemble mobile", a jazz orchestra in Bergamo. For this orchestra he wrote several arrangements and original compositions. He has collaborated for years with the saxophonist Tino Tracanna, on projects bordering jazz and music of the European cultured tradition, above all "Gesualdo", based on Gesualdo da Venosa's madrigals. He has collaborated with Gianluigi Trovesi on the realization of many projects for orchestra, among others "Dedalo", which won the "German Critics Award" as Best Jazz Album Of The Year in 2002. In collaboration with the piano player Franco D'Andrea he also produced a "Concerto for piano and jazz orchestra". In 2006 he was a member of the jury for the “Brussels Jazz Orchestra International Composition Contest”.

Corrado Guarino has worked with the “Orchestra Nazionale Jazz”, the Civica Jazz Band in Milano, the “Enea Salmeggia” Orchestra in Nembro (Bg), the Big Band Mousikè in Gazzaniga (Bg), the WDR Big Band in Cologne, the Blast Unit Orchestra in Milano, the “Orchestra Sinfonica di Bari”, la Tunkunstler Orchestra in Vienna, the “Orchestra Sinfonica della Svizzera italiana”, the Accademia Bizantina in Ravenna, ecc.
He has published “Le fiabe del jazz” (The Jazz Fairies), a series of albums for children with his quartet and the writers Roberto Piumini and Claudio Comini. A show based on this work was performed in several jazz festivals and, in 2011, at the Mantova Literature Festival. He is the leader of a jazz quartet, where he plays piano. He has taught jazz at the Conservatory in Parma and Venice; he has taught band instrumentation at the Conservatory in Avellino, Bologna, Monopoli. From 2004 to 2013 he was a teacher of ensemble at “Nuoro Jazz” seminaries, directed by Paolo Fresu. At present he teaches jazz composition at the Conservatory in Brescia.